Which came first, the Good or the Bad in World Civilization? Part I 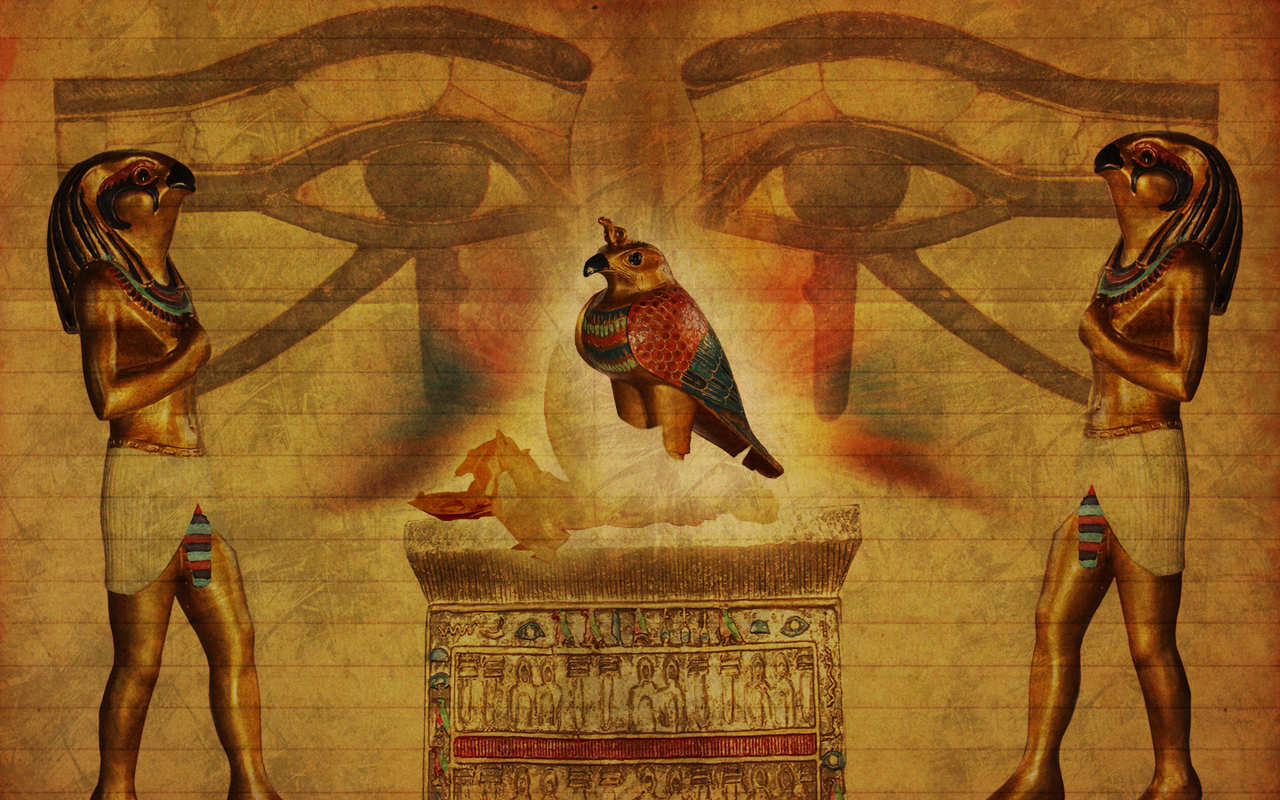 Satan bragged to Jesus in the Wilderness that he was the master of all the world’s Kingdoms, and he would give them to Jesus if he would only bow down and worship him.

“The devil led him up to a high place and showed him in an instant all the kingdoms of the world. 6 And he said to him, “I will give you all their authority and splendor; it has been given to me, and I can give it to anyone I want to. 7 If you worship me, it will all be yours.” (Luke 4: 5-7)

Matthew describes this Wilderness confrontation differently (Mt 4: 8-9) for in his version Satan only says those kingdoms were his, and says nothing about how he came by them.

Did the Devil build these kingdoms from scratch, or take them by conquest, guile and persuasion, or receive them as a gift?

This meeting in the Wilderness occurred roughly in the Year 30 CE.

And it raises all kinds of interesting questions about the relationship between Old Clootie and God, going back to the Garden, and even before. Of course we can never know, but it should invite speculation into the nature of Man in pre-civilization tribal society, in general moral terms, versus the historically better-known pecking order of human societies that kicked off early civilization.

In simple terms, the advent of civilization came at a high price, namely the glorification of king-based societies, and the removing of all the powers we believe to have been vested in individual men and women, also known as “freedoms”, and re-investing those into the hands of an elite few, the ones with the whips, up on their horses, and their armies, and throughout history, living in really nice splendiferous homes, called palaces and castles, with the best of foods, warmth in the winter, attended to by servants who may or may not have had time off or money to go into the village and buy a beer, taste some of mom’s homemade soup…while the other 90% huddled in the cold, and whose job it was, in the planting season, to grow the food to feed those in the High Palaces, and later, cut stone to build tombs for their kings.

And we also know, in relatively short order there was the creation (some say “evolution”) of religions that justified and explained why the world was ordered this way, broadcasting to everyone that “the gods” had granted all these good things to the king(s) in the first place, and that those kings had a divine right to rule, with their blessing.

We still see this sort of thinking today. In fact, it is more pervasive than we know, since it had largely been buried in America since the King of England stopped owning us three centuries ago.

Like the kings, those gods were also housed in special temples built with great blood, sweat and toil, and were almost as magnificent as the tombs and palaces for the kings.

Today people will travel thousands of miles to and pay thousands of dollars to see these marvels (now restored) and to hear lectures of the magnificence of these civilizations, and the great legacy they have bequeathed to Mankind today, even as at least twice as many lie buried beneath the sands and the tangled jungle vines, from Mongolia to Africa to central and South America.

The natural law of Kings

Of course, all these kings tried to start dynasties, passing on their kingships to next of kin, some which may have lasted several generations, but were always overthrown eventually, sometimes from within their country, and sometimes by foreign invaders. Few if any simply died of old age and just withered away.

But this king system never changed, as it is one of the telltale marks of Satan. In fact, probably his trademark achievement. Of the options I mentioned above as to Satan’s boast to Christ, I’m inclined to believe he gained them all by “guile and persuasion”. That’s what he’s good at.

The king system was begun over 5000 years ago, and did not die out in the West until just about a century ago, and still exists in other parts of the world. But it did not, or was not allowed to fall into disrepute or disrepair, (you can decide on your own) until other systems had been created to replace the kings that were based on the same 10% management class versus 90% managed worker bee class formula that defined the system begun in Egypt and Mesopotamia.

Every European nation has ranked its ancient kings on a good to bad to worst scale, and in all cases, the good were by far the more rare. A few kings were kind to the poor or weak, but far, far more abused them and almost all were at best as indifferent to them as they were to livestock despite the fairy tales you’ve been told about beautiful princesses and their kindly fathers. That’s why they were called fairy tales… although most harkened back to a pre-historic era where such chiefs did exist, as I’ll describe later, such as you could find in the Arthurian legend in England, where they say their history began.

Even among baptized kings after 800 AD, when the Holy Roman Empire was created by allowing the Catholic Church to become shareholders in King, Inc, few actually lived very pious lives. They still lopped off men’s heads, deflowered maidens, burned villages willy-nilly, and generally kicked their people around. But they were still able to get a final Church blessing on their death bed with the guarantee from a priest that their souls would fly straight to Heaven, even passing Purgatory, unless there was some money to made by the Church on the back end of that promise, as was more often the case by the 16th Century, and one of the listed reasons for the Church to be split up by a priest in Germany. (“The Church as Middleman” also an interesting topic.)

This Q & A discussion turns on the fact that “Evil” (I prefer to personify it and call it by its historical name, Satan, but you don’t have to) seemed to have baked itself into an “executive management design” that expects humans to behave in certain ways if given certain power over other people using an endless competition between what we with a theological perspective call the Seven Deadly Sins; Lust, Gluttony, Greed, Sloth, Wrath, Envy and Pride.

The variables in the ways these recognized “sins” (even practitioners recognize their choices as sinful, especially if they know they can be forgiven at last rites). I would hate to have to debate this point with Chesterton on the Other Side, but would be so happy to be there I wouldn’t mind it. The greed that leads one to gain power can just as easily bring about his downfall at a later time. Since every person consists of at least four person, these conflicts can arise within a person’s inner self; his family, his court, his ruling inner circle, as well as  his neighboring kingdoms. So can conflict with one another in an almost infinite variety of ways.

Thus, these sins create a conflict with each other that is multi-dimensional, and almost never ending.

The genius of Satan’s creation here, if he is its actual creator, is that the superimposed king system itself, which clearly is a product of evil engineering, is never placed in jeopardy. It was CS Lewis who first described Satan as a corporate CEO, who has the executive power to shuffle his front office, all the way down to the factory floor, as many times as he sees fit as long as he has a product to sell, and still controls the market. At one time, until 30 AD, Satan was not only the political head of the whole world, but the spiritual head, as well. (Mark Twain)

For the past 2000 years, however, God has been horning in on his market, and the Devil cannot abide this kind of competition. In this regard, he views the United States as one of God’s tools and a major impediment, for just be existing America teaches by example.

Satan’s king system was the political head of the whole world for around 5500 years, but has ready replacements standing in the wings that are as oppressive and dictatorial as the previous fifty-five centuries, with only one train of thought standing in its way.

My mission here is to encourage people who think they may find this type of king system beneficial for themselves to think twice about their choices. Often, today they think they would be a part of management in such a system as they have been educated to believe they are better than that other 90%, but also deny in their hearts that those listed vices, above, guide them, while clinging to their opposites, the seven Virtues, Chastity, Temperance, Charity, Diligence, Patience, Kindness and Humility.

Something has to give before they wait too long to find out what they have bought into, for in the modern corporate world Satan has designed, it will be staffed by wide-eyed innocent young people who find themselves locked into the bottom floor of that executive office building, an 8 x 6 cubicle with desk and computer, metal In and Out trays, without even so much as a reserved parking spot, nestled in with twelve floors of other saps just like themselves, all for the luxury of the top floor, and knowing the colleges are pumping out three million annually, many of whom will gladly line up to replace them.

Looking at the world as Satan had designed it for thousand of years, and largely kept it intact, one of his principal devices was to convince his agents on earth that they were doing Good while doing his bidding.

For the kind of Evil we are describing here can no more be dismissed or written off as accidents of Nature, freaks or anomalies, as can the creation and rise of America as the opposite side of Evil. Both were created by an invisible hand, but not the same.

Because we can fix the time of when Good turned toward Bad, and can reasonably list the causes why, around 3500, I choose to use ancient Egypt as my model instead of Europe. This was when ‘merely’ pagan people, who lived in a more cooperative society became cruel and mean, evil in all sorts of ways simply because they had gained power over others, This was 2000 years before the Yahwist (Old Testament God of Abraham) story was first written down.

A pre-Christian Good existed for thousands of years in this world before the early civilizations, only we never hear anything about it because it was before writing, and before metallurgy, so artifacts are very few, and writing non-existent. And modern historians look askance at legend as little more than fairy tales and bedtime stories among pagans.

(Keep reading as it appears modern historians have more provable biases than did the ancient pagan folklorists. )