In my Introductory article, asking “Just How Important is Public and Private Education?” I closed it with my grandfather advising me when I was still about 12-years old, “When you visit a place try to figure how it might have looked before people first settled there. And then ask yourself why they would choose that place.”

I never actually did that at the time, but 35 years later I revisited my hometown, shown in the photo, to show it to my youngest son, who was 14 at the time. Since he’d never seen the deepest parts of the Appalachians his first question was “Why would anyone want to live here…with one road in, one road out, at the foot of a big mountain?”. I can sort of imagine the first hundred settlers stepping out of those boats at Jamestown thinking the same thing about the desolate place they’d bunk that first several months in 1607. Not a single familiar man-made landmark in sight.

It would take about an hour and a half for us to cross that mountain, about 14 miles of hairpin curves and switchbacks, before we’d level back out into the wide valleys of Virginia on the other side. (He got car sick to boot.) My only answer to his question was “This is where the coal was”, and that every person who came here, every road, every stretch of rail, every house, were all built in pursuit of that one thing, to dig that coal and then send it off to steel mills near Chicago.

Jamestown had a different purpose, for it was a private company that sent there to settle farmers. The Virginia Company. Cape Cod and the Mayflower Pilgrims 13 years later, at Plymouth, had still another purpose, religion. Then the Puritans (different from the Pilgrims) came in 1630, and in much larger, more organized fashion, settling near current day Boston. Then others and others came forming the other colonies of New England. And while they all had a stated purpose, religion only a part of their calculus, becoming a Crown Colony was always the end result, though not part of their original thinking.

“Empire” was not one of the reasons the American colonies were patched together. True, it was fashionable in royal circles that every square inch of land occupied by “civilized” people should be under the authority of their civilized king. But America actually went on to bring headaches to all the world’s kings’ and wannabe kings’ world view which endures to this day, having been the first to be able to stake out Man’s relentless pursuit of private property and happiness on his own terms.

Consider: Just as King John Lackland bolloxed up the feudal system by accidentally providing a loophole for serfs to own land in 1215 with the Magna Carta, thus allowing the “want-to” to be tasted, 450 years later, the Catholic Stuart kings of England who succeeded Elizabeth I bolloxed up their colonial experiment in America by accidentally providing a hospitable port of debarkation for 200,000 thousand Scotch-Irish from 1710 to 1775, “who wanted-to-own-land” all because Charles II owed the Quaker William Penn money, and gave his Quakers the colony of Pennsylvania. Who knew that the Puritans would show those Presbyterians the left-foot-of-fellowship in Boston, considering them a little too rough around the edges for their self-righteous sensibilities, or that they would be invited to come through the Philadelphia ports, where the Quakers knew no strangers? Coming in waves of a couple of thousand at a time, they settled the entire Shenandoah Valley, by first traversing the southern parts of Pennsylvania til they took a left turn around Cumberland, Maryland, and headed due south down the Valley. You can trace their trail just by noting the Founding-dates on the highway signs entering town, continued into the early days of the Revolution. Reaching Powell Valley where Tennessee, Kentucky and Virginia join, where they mostly turned west, settling the valleys of the Carolinas.

That single first turn in the road for the Scotch-Irish to choose Philadelphia instead of Boston probably made the difference in how the American Revolution turned out, because it would be their harder-edged militias that would turn the war against the British.

This photo below was taken in the 1930s, and both the houses I grew up in can be seen in this photo. No one would ever have come into this place had it not been for the fact that someone had found coal outcrops on those mountains. Whoever came here first had to do so on horseback, knowing what he was looking for, camping out, then climbing, looking for signs of coal, taking samples. Most coal in the early 1900’s was used for smelting iron ore into steel, not for heat, so those guys on horseback were likely contracted by the steel various steel companies. My town was built and owned by International Harvester, who needed steel for its farm equipment. They bought all the mountains on both sides of the creek that runs at the bottom of the photo.

Since this county (Harlan) had been established since 1819, all of this land was already owned by someone else, much of it the Harlan family, but all those deeds would be recorded in the county court house 25 miles further downstream. With sparse bottom land that was fit for farming, I expect the steel company got a pretty good deal on buying up that “useless mountain”. 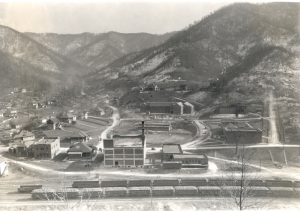 I recommend everyone learn this simple process, to teach it to kids and grandkids, for just by pausing to thinking how things and people got somewhere, these days it’s easy to find out everything else just by searching the internet. And it makes for some interesting insights if you ever do a car-trip west, especially once you cross the Mississippi River. Most of the major highways that trek west follow the old wagon train trails, and a lot of the towns were built simply because an old Army fort had been there during the Indian Wars, or a major watering hole, or maybe just where a wagon had broken an axle and couldn’t go any further. (There are such places along the Oregon Trail and Platte River in Nebraska.)

All the land that was first settled by the original colonists and settlers was unmapped. And much like Mark Twain speaking of “building a church in a silver boom town”, accurately surveying, mapping and recording a single farm site, much less a town, usually came much later after the land was actually settled.

So when the English kings dropped the charter company label and declared them all Crown colonies under the direct supervision of governors who were quickly sent here to take up residence, under the theory that the Crown was the legal owner of these lands every survivor had sweat and toiled over, this was not a marriage made in heaven. (The French and Spanish built their empires to prevent this very sort of collision from occurring, which only insured their colonial collapse in a different way.)

To say the least, the people of the American colonies never saw it the way their kings saw it, and went about their merrye way doing what they pleased with their land, buying, selling it or even losing it in games of chance, while regularly complaining, even dressing up like Indians, to show their displeasure with the uninvited management of their affairs from 3000 miles away. (I take up this history in the next chapter.)

Almost all that land in the United States except for the original 13 colonies was owned by the United States, excepting Indians lands that marked by treaties. (For instance, there are 12 Indian reservations in New York State.) You probably didn’t know this.

Those that were never owned by the US government were the 13 colonies, Kentucky, which was largely an unmapped county of Virginia, and 15th state to be admitted (1792), and Vermont which had declared itself an independent “republic” in 1777, being admitted in 1791 as the 14th state. Next came Tennessee which was first called the Southwest Ordinance, and was admitted in 1796, the 16th state. And Texas was never owned by the United States, having gained its independence from Mexico in 1836, become a Republic, then joined the union in 1846.

The chain of title for the rest of the land in what is now called the United States began the US government after they acquired their independence. That first lot was called the Northwest Ordinance, from 1787, which came to via the Treaty of Paris ending the Revolutionary War, the British ceding to America all the land they controlled south of Canada. The Northwest Territory was created by Congress in 1787, and the government offered incentives for people to move there. Those  territories would become the states of Illinois, Indiana, Michigan, Ohio, Wisconsin, and part of Minnesota, becoming states as early as 1803, and up through 1858.

The rest of America would take longer to become states, for they all had to go through the process of establishing stable governments, only usually with a harder, rougher lot of settlers, such as miners. And much of the territory was filled with hostile natives. The process took well into the 20th Century, Arizona and New Mexico, in 1912. the last to join. (Alaska and Hawaii joined in 1959.) I wrote a long piece called “Their Majesties the Mob” only last week, detailing some of the problems those western states had in becoming civilized enough to meet the standards which had to do with nature of their settling, and the way they had to sometimes handle lawlessness.

All that land West of the Mississippi was acquired by the United States through various ways. First was the Louisiana Purchase, which we bought from France in 1803, covering most of the West, 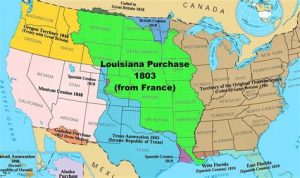 plus the Southwest and California, which we won by treaty in the Mexican War (1848), Florida from Spain in 1819, to settle a debt and finally the Pacific Northwest, Oregon and Washington, in 1846, when we almost went to war with England over the boundary of Oregon Territory, in the 54-40 of fight, which today is the northern Canadian boundary with Washington which was split off from Oregon in 1889 to become a state.

As with the Northwest Ordinance, the American government (Lincoln) parceled the arable land out to settlers with the Homestead Act in 1862, who could get 160 acres, a quarter section, for only a title fee of $18, which would be titled over to them if they’d spend 5 years turning it into a working farm. The government also held onto millions of acres, the more beautiful areas being held back as national forests and parks, including one whole state (Oklahoma) as the Indian Territory for close to half a century and open range for grazing.

(I pick this theme up in my “Sky Determines” piece, trying to tie it all together.)

Just How Important is Public Education and Private Education?