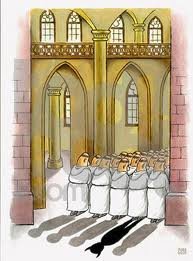 Along with the rest of the country, American Christianity is in the middle of a cold war. As this war heats up, it will mean church splits, takeovers, fights over denominational resources, and other power struggles as the Donald Trump era has increasingly brought clarity and pushed people to choose sides on existential questions.

The Southern Baptist Convention, the United States’ largest Protestant denomination, is one key example of this dynamic affecting American Christianity as a whole. On Oct. 1 in The American Conservative, Jackson Waters and Emma Posey reported on new developments in that denomination’s growing identity crisis. They contrast the Russell Moore, Beth Moore, and David French wing with the Voddie Baucham, Douglas Wilson, and I’d add Thomas Ascol wing.

“The direction Moore, French, and Moore are walking is not simply traditional evangelicalism, but a form of cultural accommodation dressed as convictional religion,” Waters and Posey write, after describing how the three have theologically shifted in recent years and months. “The result is a religious respectability that promotes national unity, liberalism, and wokeism under the rhetorical guise of love for neighbor. While Moore and his guest [Beth Moore] try to straddle the fence, there is little doubt that their biggest support is now coming from those significantly to their left politically.”

The Polarization Isn’t Superficial or Random

Many religious leaders have mistaken American polarization as merely political, thus scapegoating Trump for pulling the rug off many cockroach nests that predate his presidency. Yet this polarization in fact sprouts from irreconcilable theological and philosophical differences, which accounts for its fierceness and existential nature.

Americans are debating whether truth and human nature exist, and whether such things can be objectively defined for all or must be subjectively defined by power or “lived experience.” They are debating whether all men truly are created equal, or whether some are more equal than others. Christianity has a lot to say about these philosophical questions that also affect politics.

There are other political intersections and parallels. They include how some church leaders often use their authority against their own people instead of on their behalf, are utterly detached from ordinary people’s concerns, and appear to have little understanding of the nature of the cultural battles they try to avoid. These mass failures are prompting new leaders to take up the spiritual warfare many legacy leaders have abandoned.

Christ to the Sons of Peter: Feed My Sheep

While examples of leadership failures in the church are legion, one seems front and center today. In the face of mass government persecution of religious exercise over the past year and a half, Christian leaders overwhelmingly cowered and canceled services.

Shutdowns violate the theology of all Christians, both non-sacramentarians to sacramentarians. Those who don’t believe Christ’s statement, “This is my Body,” do heavily lean on his command called the Great Commission. In it, Christ tells the apostles to “Go and make disciples of all nations,” then tells them exactly how: “Baptizing them in the name of the Father, and the Son, and the Holy Spirit, teaching them to observe all things whatsoever I have commanded you.” You can’t baptize or make disciples via Zoom.

In addition, corporate gathering for worship is expressly commanded in the Bible. Christians also don’t live in fear of suffering or death, for “to live is Christ, and to die is gain.”

For Christians who do believe in Christ’s real presence in Holy Communion, forbidding in-person worship is an even greater blasphemy. It means denying the Christ-mandated distribution of his physical Body and Blood to heal and preserve the souls of the redeemed for all eternity, the very reason for which Christ came to earth, was crucified, and resurrected.

All this means the very people charged with feeding Christ’s sheep his most precious Blood and Word, as Jesus demanded of Peter before commissioning him as an apostle, instead spiritually starved Christ’s children. They left the sheep without the shepherds commissioned by Christ Himself to care for them even to the point of death. These are the acts of traitors.

‘My People Are Destroyed for Lack of Knowledge’

An abandoned and starving flock is easier prey for false shepherds and false teachings. It’s therefore no surprise that the same churches and believers that have forsaken Christ’s most important commands are also riven with the trendy heresies of cultural Marxism. Widely read evangelical publications, high-visibility preachers, Christian universities’ professors, and church bureaucrats often either refuse to rebuke or openly endorse the identity politics racism, erasure of sexual differences, and indulgence of sexual sin in vogue in the West.

As Baucham notes in his book “Fault Lines,” religious leaders who push back on identity-politics corrosion of Christian teachings are typically criticized by their own colleagues, while those on the hard left are engaged with and treated as good-faith interlocutors. Presbyterian seminary professor Ben Dunson put it bluntly in an interview: “A lot of people aren’t willing to be called a white supremacist, so they stay silent.”

This one-sided pressure causes many church leaders to avoid discussing culture war topics even when those topics have major theological implications, says Adam Koontz, co-host of the “A Brief History of Power with Two White Guys” podcast who directs pastoral field education as a professor for Concordia Theological Seminary.

“It’s not that our people don’t know about these [social] issues, but they often don’t hear about it in the pews,” Koontz said in a phone interview. “We are very good at telling about, say, the courage of Dietrich Bonhoeffer, but you have to take that and apply it to modern-day America and explain why being white is not a problem.”

These Christians Are Reporting For Duty

There is a “big disconnect between the evangelical elite and the people in the pews,” said Reformed writer Aaron Renn of The Masculinist in an interview. Waters and Posey also point out evangelicals’ institutions are largely controlled by those who oppose what the laypeople believe: “Over the last year, the division between evangelicals and their leadership has only grown, raising the question of who is driving the movement.”

This is what prompted Renn and Dunson to create the publication American Reformer, to equip Christians to respond to increasing cultural hostility. The publication aims to be robustly intellectual while still approachable, aimed at both pastors and lay leaders, “To be the voice for people who have lost their institutional voices,” Renn said.

“[S]o many Protestant leaders are MIA on the big issues of the day,” Renn told me in an email. For example, he noted, the people introducing Americans to the deeply Calvinist political thought of Hungarian Prime Minister Victor Orban are the political commentators Rod Dreher and Tucker Carlson.

The people most visibly opposing “the woke revolution,” he noted, are not Christian leaders but atheist James Lindsay and journalist Chris Rufo, whose religious beliefs are not part of his advocacy. Thirdly, Renn pointed out, very few Christian institutions consciously aim to equip Christians to live in a society that is hostile to their beliefs. Instead, institutional leaders largely prefer to pretend that America is still a “Christian nation” instead of facing the reality that Christianity is now an open target for many U.S. government officials and agencies.

“The goal would be to have people who understand their own Protestant history better,” Dunson said. “Classic Protestant thinking is well aware of the fact that in a fallen world we seek to do the good we can where we are, and that means starting with our families and our communities, our states, our nation, as much as we’re able.”

“We want to encourage those who are serious and aspiring to lead to stand up. People are hungry for leadership,” Dunson said.

From the Moral Majority to the Woke Church

Koontz said deepening animosity towards American Christians is prompting more pastors to dive into such discussions with parishioners. If pastors don’t teach their people what scripture says about major cultural issues, he said, this abandonment of their duties can badly damage a congregation.

Another block to pastors addressing such problems can be evangelical theology itself, Koontz noted. The woke “children of the Moral Majority are now doing what their parents did, but in the new politically trendy way,” he observed. He underscored the belief, common to much of evangelicalism and to Roman Catholicism, that humans participate in their own salvation — i.e., “make a decision for Christ” — rather than Christ doing it all, one of the “solas” of the Protestant Reformation.

This fuels the belief that Christianity is not about being transformed solely by Christ through his clearly defined gifts of Word and Sacrament for a life of service to others, but about validating one’s faith through human works. That, in turn, stimulates a religious impetus for pursuing an earthly utopia through politics, a dangerous unity of faith and state that has historically at best fueled failed nation-building abroad and a rogue administrative state at home, and at worst totalitarianism and mass murder.

Just as substituting politics for faith also ultimately decimated mainline denominations, Koontz noted, so those who follow its woke version today will eventually abandon Christianity. The only way out of this is the same way out of every other spiritual dead end: repentance.

Joy Pullmann is executive editor of The Federalist, a happy wife, and the mother of six children. Her newest ebook is a design-your-own summer camp kit, and her bestselling ebook is “Classic Books for Young Children.” Sign up here to get early access to her next full-length book, “How To Control The Internet So It Doesn’t Control You.” A Hillsdale College honors graduate, @JoyPullmann is also the author of “The Education Invasion: How Common Core Fights Parents for Control of American Kids,” from Encounter Books.