The Post-COVID Decalogues: Part I 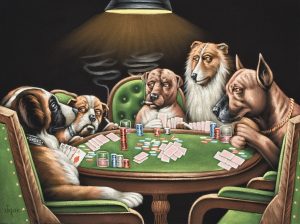 It can be argued that the first principles of humanity, at least before we decided to civilize ourselves, must have necessarily included food, shelter, and reproduction at the very top of the list. It can also be argued that the successful pursuit of these three core elements of survival would have necessarily required sheer determination and the forceful use of humankind’s free will. It can be further argued that, despite shrill protestations to the contrary from the self-proclaimed enlightened ranks among us, and in deference to the Darwinian maxims Vis a vie natural selection, our species is doomed to perpetually out-think itself until the last of the genuine thinkers have stepped off this Mortal coil. And while this might sound pessimistic or short-sighted we should consider the post-COVID future being hastily assembled by our world leaders on behalf of the human race.

All at once declaring a global emergency and seizing almost total control of all human activity while having no effective means of controlling the panicked human response they surely had to know would be coming right behind it, global leaders essentially dropped an end of the world bomb on the human race and then went home and lock themselves indoors. Probably with fully stocked storage facilities at the ready should the human race start tearing itself into little pieces. By the grace of God, and through the cooler heads on the street, enough of most of us has kept it together well enough that we might just get through this relatively unscathed.

I posed the question here, however, as to whether being “relatively unscathed” is in the human race’s collective best interest going forward?

Social order through a Biblical lens

You don’t have to be religious to appreciate the historical context of the Mosaic decalogues, AKA The Ten Commandments, and what was intended when they were bestowed upon the Hebrews in the desert. And while none of us were there to see it for ourselves, and none of the more learned historians than I have yet to unanimously agree on the details, no one argues that the goal of the Ten Commandments was to ‘civilize’ and organize and coalesce the people around a common goal with a shared set of rules, responsibilities, and expectations of all the people in the community. Further, it is collectively understood that the Ten Commandments were intended to be broken down into two sections; the first four laid out the Rules of Engagement with the Creator. The other six Commandments were meant to lay out the Rules of Engagement and peaceful co-existence amongst and between God’s creations.

1. You shall have no other gods before Me.
2. You shall make no idols.
3. You shall not take the name of the Lord your God in vain.
4. Keep the Sabbath day holy.

Experts suggest the Ten Commandments were handed down by Moses well over 3,500 years ago and it doesn’t take a rocket scientist to see that not only has the contract between God and the people been destroyed but so, too has the contract for peaceful coexistence amongst and between God’s people been pulverized into a fine powder and blown into the winds of History.

Several hundred years after Moses delivered the Ten Commandments, with the Israelites now in the Promised Land, the people had once more lost much of their social order and personal responsibility and – more or less – weren’t even sure about this whole ‘God’ thing anymore. Back where they started in the early days of Moses, and with God in large part pushed aside, they decided they needed a king to rule over them and guide them and take care of them and give them direction. In the Biblical timeline, this occurred, give or take, around 1,000 years before Christ. This event in human history marked the turning point in monotheistic human history when humankind chose to give up its independence and free will in exchange for submission to the will and whims of another human being or group of human beings that, three thousand years hence, we have never been able to fully reclaim.

It seems clear to even the most casual observer that the more men fight to be free of bondage the more tightly they want those chains clasped around their throats.

From the first King the Israelites chose to rule over them in 1000 BC (Saul), and for every King that has followed, humankind has allowed itself to sacrifice life and limb and fortune and freedom for the benefit of someone else with greater wealth or power or station in life than their own. And, perhaps saddest of all, humankind is fully well aware of what is happening to it even as it allows itself to continue its own subjugation.

The Folly Of The Alleged Consent Of The Governed

One would think that, after thousands of years of trial and error, humankind might have determined by now that the premise on which this shell game of power is built is fundamentally flawed but this is not the case. And, as the joke goes, the definition of insanity is trying the same thing over and over again expecting a different result. Except the result is always the same, Century after Century, rinse and repeat. Wealth begets wealth. Power begets power. And those at the highest stations of life continue to write laws to rule over humankind, using the blood of the lesser among us as the ink, only to spill even more of it in the name of enforcement.

And when it came time for a new group of enlightened men, already established in wealth and station, to set themselves adrift from their King, a fresh new seed had been planted in the hearts and minds of an oppressed people that offered hope for a new chance to free themselves once more from their chains of bondage.

Let’s take a peek in Pt. II at how all of that has been working out so far.

Transform: A Euphemism For Chaos