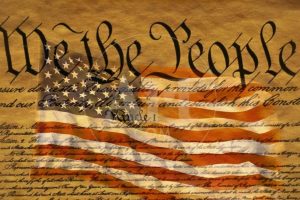 I coined this phrase many years ago, during a time in my life, on a personal level, that had brought me to my knees. These times in our national life, over the last 10 weeks, have similarly brought many of us to our collective knees. I’ll not sugarcoat it, I’ll just point out that our country has been here before. This is not to say that it doesn’t suck, it’s just to remind everyone that, despite these being the “times that try men’s souls”, they are not the times that extinguish the flames of Liberty and Freedom.

I’m reminded, as I write this, of a quote I first heard while listening to a Dan Bongino podcast that came from Quintus Ennius, an ancient Roman writer, and poet, that is worth memorizing in the days ahead:

“The victor is not victorious if the vanquished does not consider himself so.”

As sick as it makes me that, at every turn, liberals and progressives are demanding our apologies for ever having been born, I will be Goddammed if they are ever going to succeed. I will also be Goddammed if I’m going to allow them to censor us, de-platform us, de-bank us, de-program us, marginalize us or extricate us from society, or in any way change our minds about what we believe is right and how we believe this country should be run.

Much more is going to be written about this in the coming weeks, but I cannot emphasize enough to everyone that, despite their lead at the moment, there are plenty of things we can do to give back to THE Left what they’ve done to us… Good and hard.

I would like to take credit for dreaming this all up, but there is a growing movement out there, that I first heard about from Bongino, that is working to encourage all of us to build a parallel conservative economy. I got the idea from his daily podcast, which I came across quite by accident, and I have yet to hear him say one thing that doesn’t make perfect, crystal clear, and actionable sense.

First, if you can, just stop posting on Twitter and Facebook. You don’t even have to close your account… They make their money based on a statistic called “daily active users” (DAU) as they mine your personal information and sell it to advertisers who then target you for advertisements based on your click activity. Feel dirty yet? Since they banned Trump, they’ve lost millions and millions of dollars and their stock value is tanking. Keep it up! Tell all your Twitter friends and Facebook friends to stop posting in either place. Again, even if your account stays open, no posting means less daily user activity. If you were job or company needs either of these platforms to stay in business, obviously, you can’t do this but if you could pick one, it can only help.

The same applies to YouTube; closing your YouTube account, unless it’s how you generate revenue, sticks it to Google. And speaking of Google… For the love of God, stop using Google search. Start using DuckDuckGo instead. As more and more of us have started using DuckDuckGo, Google is starting to whine that their daily search activity is dropping. Meanwhile, DuckDuckGo is experiencing incredibly rapid growth! Keep it up! As well, never ever go to Wikipedia ever again; Britannica.com is factually more reliably true and accurate and is not beholden to the Silicon Valley cartel. And just in case any of you can’t live without watching videos online, go create an account on Rumble. Make sure you follow Bongino and Levin and anyone else who has started working there rather than at YouTube.

One more thing on this subject… Do not hire anyone, as a vendor or a supplier or a landscaper or a plumber or anything else until you ask them straight up whether they voted Republican or Democrat. It may sound cold, but the time for play nice is temporarily on hold. I am a big fan of Home Depot… Who isn’t?… And I will I heavily on target as my replacement for Amazon. I looked up online, using DuckDuckGo, and discovered that both of these operations donated more to the GOP than they did the Democrats so my conscience is clear. AT&T, who serves my cell phone and who seems to be in favor of helping silence conservatives, is about to get fired once I figure out whether switching out with Patriot mobile will actually work for me. I am not afraid of change if it means I can take money out of the hands of people that mean us harm. And stick it to them… Good and hard.

This is just the beginning, but the harder the Left works at suppressing Conservative voices, the harder we have to work to defend ourselves by finding new places where we can talk and share information in peace without the Silicon Valley cartel listening to everything we say, and do, and then feed our personal information to the secret police force they are trying to build in order to frame us as white supremacist and nationalists and insurrectionists, whatever color we actually are, and then put us in a de-programming class.

If you think I’ve lost my mind, you aren’t following the right news Outlets.

We will get to what they’re doing to our kids and grandkids soon enough but for now, start taking this mess as seriously as they are. A parallel conservative economy is a good and necessary first step but will require much more in the weeks and months ahead. Identifying Republicans that need to be voted out of office, coordinating efforts to contact senators and congressmen and make your voices heard, and spreading the word on your new platforms comes right behind this… But it starts with effective and unconstrained access to open dialogue between serious people.

Every second of this Carlson clip is a must-watch… Considerate homework:

Which came first, the Good or the Bad in World Civilization? Part I

“Their Majesties the Mob” and Liberal Hypocrisies of Vigilantism