As we’re clearly seeing today, but have been witnessing the past 70 years, only without serious calculation, has been the growth of a class-based society not unlike that of the old royal systems of Europe. Once mostly observed in politics, I’d begun noticing it in the business sector, bureaucracies wherever found, from Washington to the driver’s license bureau, and schools, in the 90s. Today, thanks to Covid, “oppressive rank” now stands out on the gym floor at the YMCA because they have anointed a mask-patrol, just like Sister Angela slapping the palm of her hand with her ruler in the classroom during a test, or one of the floor walkers at the sewing factory in 1900.

Her name isn’t always Karen, but it is.

In America, the idea that “pedigree rules” had been the most hateful of realities for immigrants. There were always those who had gotten here before them… in the early days only a generation or so. Then, several generations. In that first century, it was the Scots-Irish, who, when getting off the boat in Boston and being kicked to the curb by exclusivist Puritans, figured they could simply go-around through Philadelphia and find their own land without having to deal with nasty traffic cops.

Instead, America’s way West began at the left turn around Cumberland, Maryland, and down the Shenandoah Valley around 1700. And it would take nearly 200 years for that road to stop. America was many times the beneficiary of that move.

The idea that a family could own property simply by working for it altered the shape of the world and totally reshaped the ideas of class and privilege. But the class and privilege never gave up trying to get it back. Call it a secret supplication of its heart.

Two hundred years later, newer Americans would be invited to come here to work in an industrial economy just busting at the seams, needing workers in their factories, mills and offices. The immigrants had no idea what to expect from their new American bosses, only some memory of how life worked under their Old World systems, and some hope of a new life of property.

The bucket of cold water came in hundreds of different disguises; when a young Irish lassies’ first job was cooking and cleaning for a third-generation Englishwoman, or those legions of factory workers from all over Europe who found themselves locked into sweat shops, or telephone switchboards, or the miserable world of an office under two levels of preening bosses with thousand yard stares while walking among the clericals. 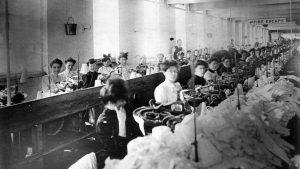 This early wave of immigrants’ first lesson learned was that the promises of America were largely for their next generation, not their own. They would sweat so their kids could become educated. Still, do the math, for the good news was that more than half America’s companies were built by new ideas and new money from these new people, and not from a closed society of rich aristocrats and anti-competition mercantilists. A half century later, after World War II and the GI Bill, fellows would even find themselves working under the supervision of guys they’d gone to school and hunted and fished with.

But by the 1980s and 90s that generation of worker and boss had died, and while they tried to maintain that extended hand across the aisle, the newer system of management and corporate design no longer recognized the profitability in such a gesture.

GK Chesterton, the middle class moralist, disliked the Tories because they represented the English aristocracy in Parliament, at least in his day. Chesterton was a Liberal (not to be confused with American liberalism), which had once been the Opposition Party in England to the Tories, then themselves being replaced by the Labor Party in 1922, which was formed around the same time the American Democrat Party formally recognized itself as the “party of the worker” around 1900, representing trade unions and “respectable socialism”. The rise of Bolshevism in 1918 and Fascism in Italy in the 1920s changed the face of Labor, only it took a couple of generations for the differences to become totally blurred between democratic socialism and communism.

The modern “sense of class” is rarely found in the “love thy neighbor”-wing of the soul’s library. It’s almost always found on the shelves containing Man’s (and Woman’s) more egregious vanities as to who can out-conceit, out-privilege, out-snob and out-indifference the other. These human attributes belong to the Other Seven, not the Seven Virtues. Many may seem as mere peccadillos, as when one admires him- or herself in the mirror, but like a .22 pistol found in a trash can in Bedford-Stuyvesant, they often go off in the wrong hands.

And as we get older, especially after we see actions and attitudes we knew more intimately when we were younger, acted out by young people today, there often comes over ourselves the urge to pause and reflect.

It’s those who don’t feel this need I want to speak to here, because, being three generations removed from the youngest of the young adults, I’ve done a lot of pausing and reflecting in my life, going back at least 40 years, when I first saw and heard a little bit of myself in my sons, now aged 50 and 47 respectively. It’s a practice I recommend, but, as just mentioned, not likely to be found in a far larger number of adults aged 21, 41, or 61 than I had once imagined.

If you’ll look it up…in a book preferably written before 2000…you’ll note that America never had a “royal class”. In the 50’s the tabloids told us Hollywood was America’s royal class. So why do so many Americans act as if they belong to one now?

And how long has this been going on?

As in all things, America is unique in that we were born of common men and women, which was always Chesterton’s biggest knock against Americans, even though, from the very beginning we had a fractious relationship with the noblemen who threw their weight around against us…in part because they threw it around from a distance of over 3000 miles.

Just forget the Bolsheviks and communism. They gave up on that dirge in the 1950s.

Even before the Bolshevik Revolution in 1918 many Americans never truly bought into the notion the Russians actually wanted to create a godless, property-less state where everybody called each other “comrade” (gender-neutral). It never made sense to Americans who had been born and bred propertied, or would soon become that way. It was the principal reason most were here. Ordinary Americans’ fifth sense simply told them a con lay at the bottom of the Bolshevik plan.

Turns out they were right.

Although history would never record it, by 1950 and World War II won, within Russia it was obvious their phony jig was up…only all the USSR’s other 99% never knew it, including most of the apparatchiks, genuine Party members who did the bulk of the grunt work for the State. It looked something like this in 1986, at the time of Chernobyl:

10% of the Soviet population were Party members, or 19 million. Of those Party members, 56% were industrial workers and collective farmers, or 10.4 million, while the other 8.6 million were the bureaucracy, or apparatchiki -the “apparatus”, all of these overseen and managed by the “nomenklatura”, who were appointed to their positions by various committees. A few hundred thousand at most…of 190 million. But they were the ones who had lavish dachas in the forest where they lived rather sumptuous lives while maintaining small everyone-is-equal apartments in the city (I’ve seen both), only enjoying the simple luxury of a chauffer-driven car back and forth to the office as befit a member of party rank.

No one knows when this hidden “class” system began, before or after the war, but it was begun in Stalin’s day. So, in truth, the “workers paradise” lasted only about 20 years, if you throw in the Russian Civil War. In western corporation terms, this is about one bureaucratic generation, you know, the time it takes to take that office job, and rise as far as your talent, butt-kissing, eye-scratching and back-stabbing can take you before you simply wear out and no longer give a damn, whether you are in charge of apportioning 5000 available light bulbs produced at the State Light Bulb Fabrika to state offices that require 30,000 light bulbs or you are a technician whose job it is to test the power-regulating system and its emergency safety systems at Chernobyl. In Russia, this was same-o, same-o, and only in Amerika did our corporate officers still know to keep turning their staffs over to keep them fresh and alert. At least until the 1980s, when, as one senior manufacturing corporate officer told me, “You can train monkeys to build cars.” I think he learned that at Harvard Business School.

The Communist Party had thrown in the towel on self-denial by 1940. But they had continue wearing those stupid little uniforms, and pretending to be just as dirt poor as Ivan Ivanovitch down on the first floor.

The nomenklatura just could never let the proletariat know.

So, what the Soviet “royalists” did achieve was in being able to keep themselves so removed from the lower classes no one knew anything about them; if they assaulted their secretaries a la Cuomo, who’d know? Or launch angry tirades and the occasional lamp at a questioning subordinate like Hillary did?  Who’d know? And did they feel even the least bit of remorse about the lives lost at Chernobyl? Or the mistakes they’d allowed to be made they there? Where was New York Times, Washington Post or CNN to cram a microphone in front of them for a comment?

But being a foreigner who had been a part of staff meetings with the CEO in Fortune 500 companies, as well as a closer-than advised relationship with factory hands, I was able to watch Soviets go through their motions in several instances, with a member of the Central Committee, plant managers at T-72 tank and MiG factories, as well as small sewing room factories and doll manufacturers, and the only commonality with America I found was with the floor workers. That seemed to be universal. I had to go the USSR to learn what I didn’t like about the organizational changes American business had made in the 80s and 90s.

The current American crime wave today is about class, and protecting the rank and privileges of that class, and denying anyone who would seek property and wealth to be from that class or by approval of that class.  Criminal lawyers will prosecute and defend crimes with skill and daring, and judges will adjudicate with inestimable wisdom, until “class”, like Satan, appears on the docket in any of its hundreds of disguises. Then they are circle up to protect that which is exclusively theirs.

The 2020 election steal was about class, not just get rid of Donald Trump and all that crazy talk about “we the people”, but to secure the system by which the people can no longer have a voice at the ballot box, and therefore no longer a voice in Congress or in government.

Just How Important is Public Education and Private Education?

Darwin Agrees with God More Than You Know

Howard Roark’s Speech at his Trial from “The Fountainhead”, 1949, Ayn Rand