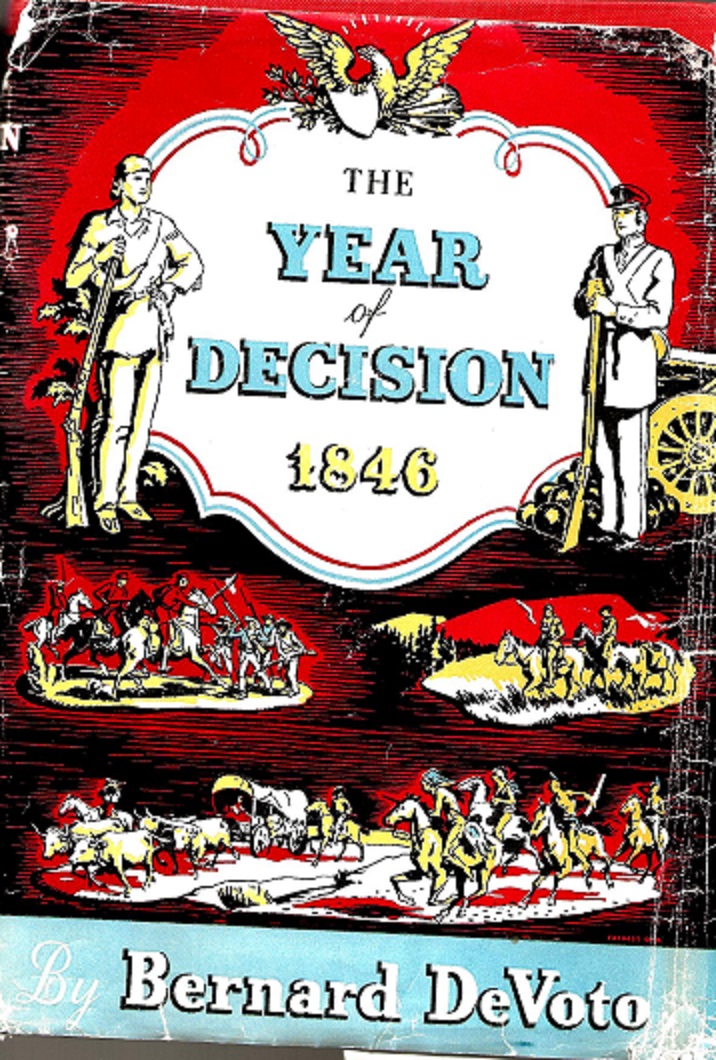 In 1942, just as WWII was starting in America, Bernard DeVoto published the first volume of his trilogy about the American expansion into the West, (The Year of Decision, 1846) which in historical time was the last episode, having begun with the Lewis and Clark expedition, and ending with these events of 1846, which included Texas becoming a state, the Mexican War and the Halls of Montezuma, the accession of California, the Mormon migration (or expulsion…it’s your call) to Utah, and the settling of the Oregon Question, all of which finalized the map of the American borders.

Those events all started in January, 1846, DeVoto narrating a month-by-month telling of events on each of those fronts, including the doings in Washington under the Democrat Administration of James K Polk, a protege of Andrew Jackson.

About a third of the way through, April, 1846, DeVoto did a short “Interlude” chapter entitled “Doo-Dah Day”, just 4 pages, to do what very few historians ever did in that period, and that was to weave what was going on in the American popular culture, mainly music, but also literature, as a better way to understand American thinking then.

On April 27, ’46 the Virginia Minstrels of Edwin P Christy played in New York for the first time, at Palmo’s Opera House. This date will do as well as any to fix a fact; that American drama has matured it first narrative form. For at least four years now such companies as Christy’s, or the Kentucky Minstrel’s, the Congo Melodists, White’s Serenaders, the Sable Harmonizers, Campbell’s Minstrels, with such artists as Daddy Rice, Dan Emmett, Cool White, Master Juba, Dan Bryant, had been appearing in the full-length standardized variety performance in blackface known as the minstrel show. It was already universally popular and its popularity was to increase for nearly half a century and to decline only slightly before the twentieth century was well along.

The minstrel show was a species of vaudeville, a succession of gags and songs, interspersed with acrobatics, dramatic sketches. It rested on the solid convention of the stage Negro and developed out of a full quarter-century’s elaboration of that caricature. Already songs as “Jump Jim Crow”, “Ol’ Dan Tucker” and “Such a Gittin’ Upstairs” had impressed themselves permanently on the national memory. They in turn had come—a rather long way—out of the genuine singing of uncaricatured Negroes, who also contributed to democracy’s new art form a rich variety of dance and songs—levee songs, work songs, jubilees—all of them turned to caricatures by the minstrels. But many other kinds of music went into the flowering. The kind of fiddling called folk music, such as fox-hunting keens, “The Arkansas Traveler” and “Frog Went a Courting” was incorporated, and any tune detective can untangle innumerable airs from the balladry which we still know in “Springfield Mountain”, “Hand Me Down My Walking Cane”, “She’ll be Comin’ Round the Mountain”, “Weevily Wheat”, “Rosin the Bow” and a thousand others. The world’s most musical people had a sudden focus for their music.

A Tin Pan Alley had arisen to give the minstrel songs, and the best of the songsmiths was only two years away from beginning his service writing songs for Christy. In March. ’46 a 20-yr old Pittsburg youth failed to gain an appointment to West Point, so by the end of the year went to Cincinnati to keep books in his brother’s commission house. He took with him manuscripts of three songs. One celebrates a lubly cullud girl, Lou’siana Belle. In another an old nigger has no wool on the top of his head in de place whar de wool ought to grow, and you heard your grandfather, as your children’s grandchildren will hear theirs, telling the chorus to lay down the shubble and de hoe for poor ol’Ned has gone where de good niggers go. And in the third, American pioneering was to find its leitmotif for all times; it was “Oh, Susanna!”

Stephen Collins Foster need not occupy us very long. He was different from his fifty contemporaries, and his songs were different from theirs, only in that obscure chemistry of genius concentrated an era and a society in him. He was as Bohemian as Edgar Poe. He took no thought of the morrow, could not make a marriage work, lived precariously, accepted the tinsel of the cheapest theater, came to the proper end of pathetic artists (dying at 37)—-and said perfectly what his people felt.

A hundred years after him you need only play the opening bars to “My Old Kentucky Home” or “The Old Folks at Home” to stir in any American the full nostalgia of things past or to bind an audience, be it naturalized Czechs or Daughters of the American Revolution. Art is the unpredictable, the miraculous and undefined, but if that be art which a people take  most closely to their bosoms and hold there most tenderly and and longest, then Stephen Foster is incomparably the greatest American artist.

He dreamed of Jeanie with her light brown hair, floating like a vapor on the soft summer air. He supped sorrow with the poor, dreaming of a once happy day, and with the gentle voices gone he had no friend left but in Old Dog Tray. He roamed with gentle Annie but could never hear her winning voice again, the happy dream had passed like a fleeting beam with sweet Laurie Lee, and the bell must toll for lubly Nell, his dark Virginny bride. Beautiful dreamer, awaken to me; light is the young heart, so come where my love lies dreaming the happy hours away. It changes to a jig and here is Susannah—de buckwheat cake was in her mouth, de tear was in her eye, and he was off to Alabama wid his banjo on his knee. It becomes a cakewalk, the buck and wing, and turnaround, and jump Jim Crow—de Camptown race-track five miles long, gwine to run all might, gwine to run all day, he bet his money on de bob-tailed nag, somebody bet on de bay. Gone are the days when my heart was young and gay, where are those hearts so young and free?—I heard those gentle voices callin’ “Old Black Joe”. All de world is sad and weary, everywhere I roam. He made the Americans member one of another.

Between the America of the 1840’s and the America we belong to (the 1940s) a century has built a barrier which can be penetrated only with the greatest difficulty. What is called the “modern temper” has complexities, ambiguities and tentatives that the 1840s did not know. We persuade ourself that our consciousness is tragic. That may be; certainly the American consciousness of the 1840s lacked the sense of tragedy. It had achieved only pathetics. But no one will understand the decade in whose mind that assertion is tinctured with reproof or superiority. Where would you find tragedy in say, American literature of the time? Not in Walt Whitman, not in Hawthorne’s eloquently engraved melancholy, not in the cheap gloom of Edgar Poe. Yet the white-robed maiden who died in gift books, annuals, and the mortuary poems of Mark Twain’s aristocrats (whose date in 1845) is not to be understood as a grotesque but as a limpidity. What makes her distasteful or even emetic to us is not insincerity or sentimentality in the emotion that lamented her, but a neutral-colored thing that has been added unto us, and is called, without value, sophistication. The emotions of the 1840s were simpler than our own, more limpid, more absolute, and more forthright.

That at least is where one man (the author) comes out after years of trying to understand these people by way of what they did, what they believed and what they felt—-by way of their writings, observations, their religion, their causes, their institutions, their dreads, hopes, pleasures and ambitions. They were an inchoate people between two stages of an endless American process of becoming a nation, with their heads down and their eyes resolutely closed to the desperate realities which a few years would force them to confront in the deadliest of awakenings.

They were a people without unity and with only a spasmodic mutual awareness, at this moment (1846) being pulled further asunder by the centrifugal expansion of the frontier and the equal explosiveness of the developing industry—both of which would turn back against the nation-making curve, but not for a long while yet. A people going blithely into a war of conquest whose certain ending few tried to foresee. A people divided by racial differences, sectional cleavages, cultural antipathies, an enormous disparity of assumption, expectation, hope and philosophy. A people united only by a political system and tradition which were nearing the deadly test, by habits of democratic association—and by a common readiness and reality few took conscious thought of.

Stephen Foster caught it at dead center—the maiden’s grave under the willows, the old times that come again no more, the Camptown races, Susannah’s immortal quickstep—the ready regret, the instantaneous and immortal confidence that was bred in the bone and acknowledged if only half realized in a joke. A forthright people, with a readiness of sincere tears and an energy  that neither be measured nor stayed.

The way to understand the persons who were to fight an un-premeditated war and by building new homes in the West push the nation’s boundaries to the Pacific—is to steep yourself in Stephen Foster’s songs.